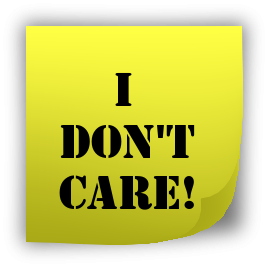 The Torah describes the sin of worshipping the Eigal as if it was a national sin. In truth, 3,000 people worshipped the Eigal, representing only a half of 1%. Why, then, is the Eigal described, and why was the nation punished, as if the majority had sinned?

There is another way to look at the story. Only 0.5% sinned, but 99% did not protest. Since they were the vast majority, they could not have been afraid to defend the Torah, and nevertheless, they didn’t. Chur was killed, and Aharon was left “on his own”, forcing him to compromise his standards as a stall tactic, until Moshe Rabbeinu would come back down from Shomaim. Why?

Apathy for anything important is a sign that the belief isn’t strong, and isn’t true.

99% of Klal Yisroel believed in Hashem, but they had only apathy towards Hashem, and his Mitzvohs. Apathy for anything important is a sign that the belief isn’t strong, and isn’t true. While only 0.5% did the Aveiroh, the remaining nation wasn’t that “far behind”.

This explanation can be seen in the story of Bais Bilgah, one of the 24 Mishmoros, the groups of Kohanim, who served in the Bais Hamikdosh. One woman showed disrespect for the Mizbeach, and the entire family was punished. The explanation that the Gemoroh gives was that without her family’s general apathy, the woman would not have been able to adopt her negative attitude towards the Avoda in the Bais Hamikdosh.